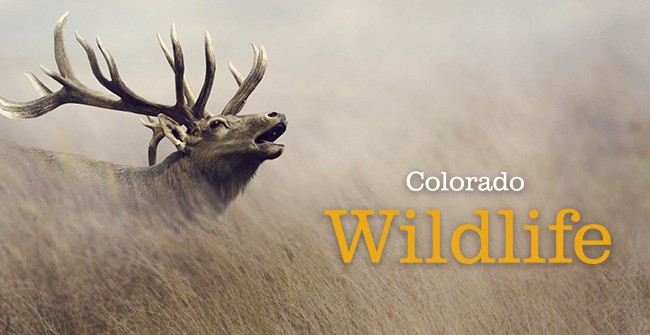 Wild animals are our neighbors here at C Lazy U Guest Ranch. On a visit to the ranch, you’re likely to spot some of the Rocky Mountains’ most iconic creatures, big and small.

Right at the gateway to Rocky Mountain National Park, we share the same wealth of wildlife that makes RMNP one of the most visited and treasured parks in the United States. The park is home to an astounding 66 species of mammals and 260 kinds of birds.

The best way to see wildlife while visiting C Lazy U is to get out into our big backyard. We’ve got more than 8,500 acres of land to explore on horseback, foot, bike, ski, or snowshoe. Our land makes a perfect natural habitat for all the creatures that live in the region. Sometimes these furry friends of ours will come right up to the ranch grounds – foxes in particular like to poke around close by.

Here are a few of our favorite species to spot in the fields and forests just beyond our doorstep. Have your camera and binoculars ready – you never know when they’ll make an appearance.

Please remember to never approach the wildlife. These are wild animals and while you’re welcome to observe them, you should never try to touch, feed, or get too close to them. 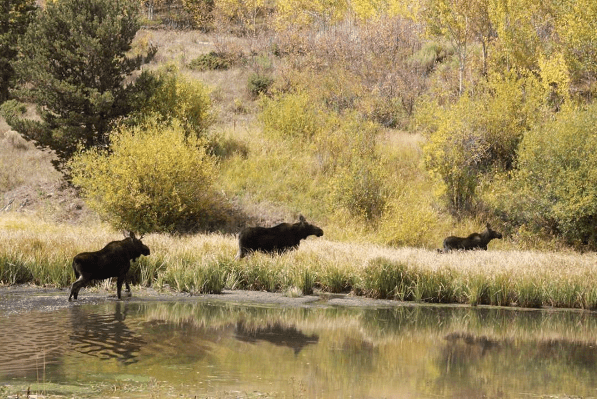 Spotting a great antlered bull moose will stop most visitors in their tracks. You can’t help but marvel at their sheer size – they stand over 6 feet tall, making them the largest members of the deer family! Majestic and cartoonish at the same time, they’re known to stop and stare right back at their human admirers. Moose can be dangerous, though, so never approach one, especially a mother moose with her calf.

How likely is it to spot a moose during your stay at C Lazy U? Well, let’s just say there’s no shortage of them in the area. Rocky Mountain National Park estimates that there are around 700 moose in the park area itself – mostly on the west side near Grand Lake, right in our neck of the woods. Fall visitors in September to November may be lucky enough to hear the moose’s mating call.

Seeing a moose is certainly unmistakable. Male (bull) moose have large antlers that are furry and slightly knobby. Their antlers alone can weigh up to 77 pounds with a span of 5 feet. 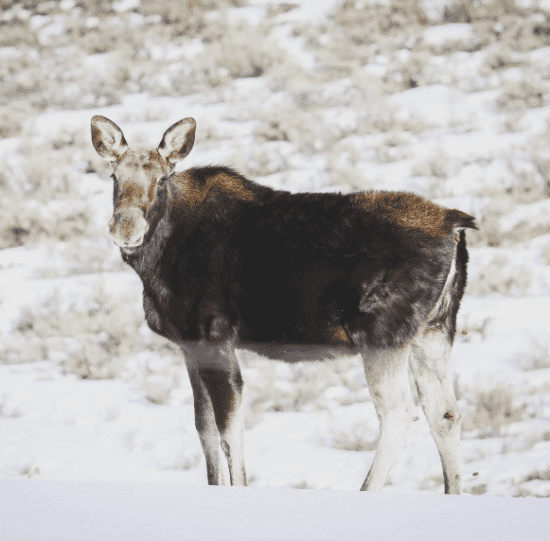 Sometimes people confuse elk for huge deer, but these impressive, majestic creatures are a species all their own. Elk are common throughout Colorado, and being right next to Rocky Mountain National Park makes C Lazy U’s property a prime location to spot elk, especially particularly large, mature ones. Rocky Mountain elk have the largest antlers of any elk, making them even more impressive.

Like moose, a bull (male) elk can weight up to 700 pounds. The antlers on a mature bull can weigh as much as 40 pounds and can grew as fast as one inch each day during the summer! Keep your eyes peeled for a sighting you’ll never forget! 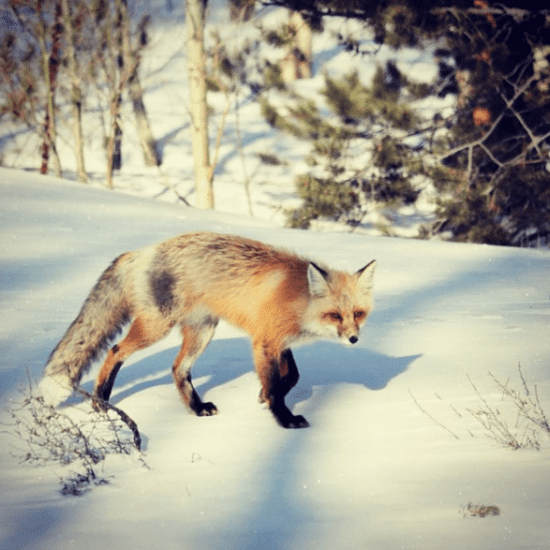 There’s something simply enchanting about seeing a red fox in the wintertime against the white snow of the ranch. Maybe it’s their quizzical expressions as they size us humans up, or their black-stocking legs, or their plush tails. The trick is to capture it on camera – foxes are shy and skittish.

Luckily, C Lazy U has a few foxes who like to roam around the ranch and don’t seem to mind posing for pictures. They sometimes even come right up to the buildings! 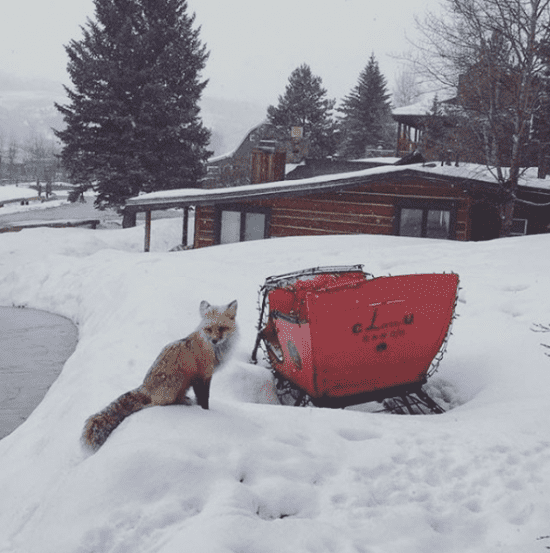 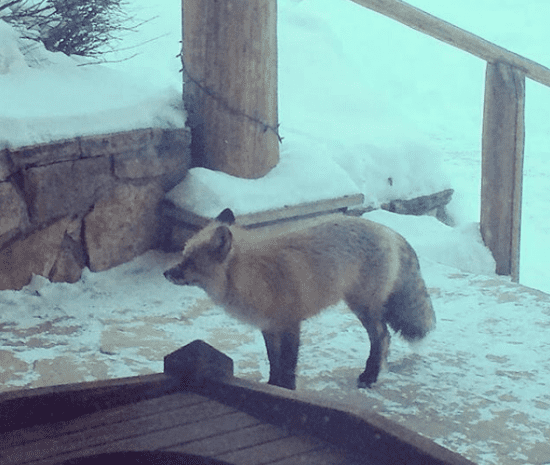 From a distance or at night, some confuse foxes for their canidae family relatives – coyotes. Wild sanctuaries like Rocky Mountain National Park and its surroundings are natural romping grounds for coyotes. They’re more gray and wolf-like than foxes, and if you hear something howling in the night, you can bet it’s a coyote. We admire coyotes for their clever wits and their strong family bonds – something C Lazy U is all about! 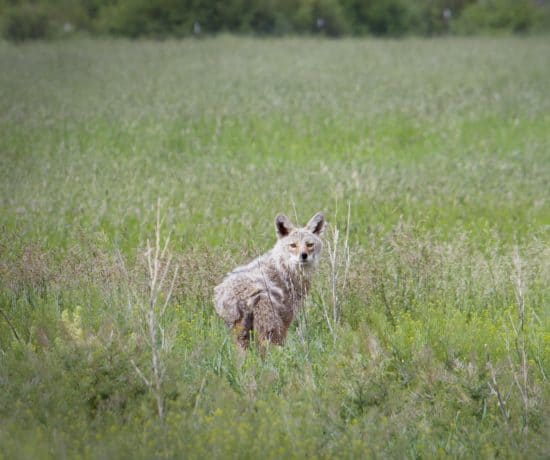 There’s a reason there’s a line in the song Home on the Range that says “Where the deer and the antelope play” – we have both here on the front range of Colorado!

When riding through C Lazy U’s lands, it’s not unusual to spot a deer. Mule deer are a staple of the West, and that’s what you’ll find on our ranch. They’re named Mule deer because of their “mule like” ears, which can get pretty big – about 75% of the size of their heads! Sometimes you’ll even find these guys checking out what’s going on around the cabins. 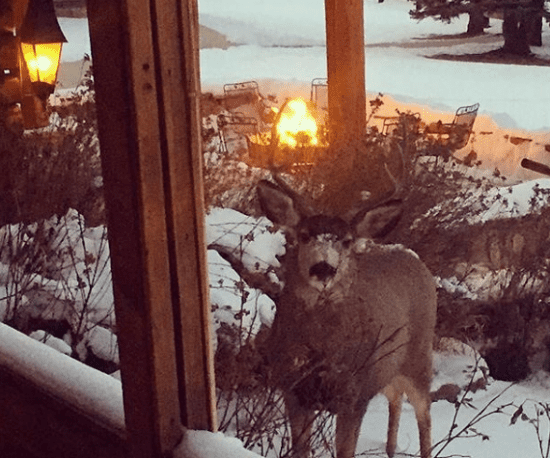 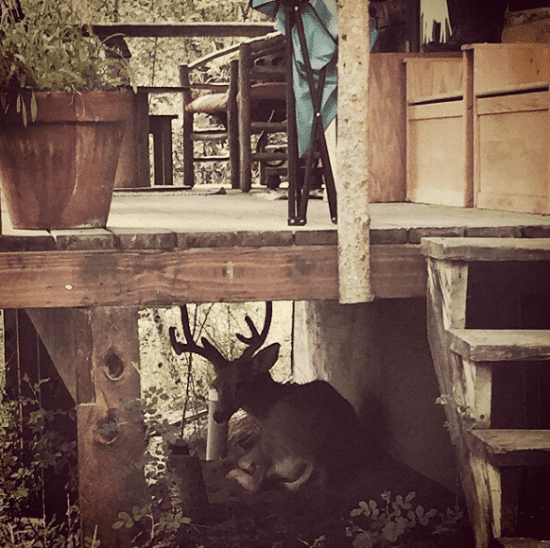 While deer are fairly common in multiple parts of the U.S., it’s not every day that you get to see a wild antelope. While visit C Lazy U Keep an eye out for pronghorn antelope – if you blink, you might miss them. Antelope are famous for their incredible speed, with the power to reach up to 55 miles per hour! These long-horned beauties are far more difficult to spot than elk and deer, making their appearances on ranch property that much more special. 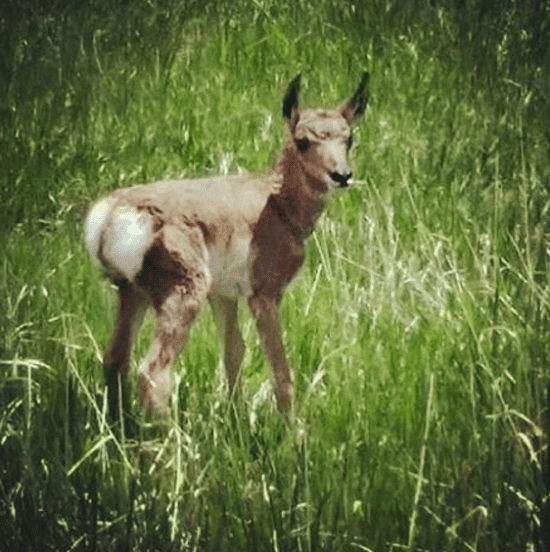 Next time you’re at C Lazy U, be sure to keep an eye out for the abundance of wildlife – you’re never sure what you might see!

Brook and Alana were so wonderful and encouraging to our son. It was our visit visit to the ranch and his first time on a horse and they really took great care of him. Braley was such a joy as and so helpful on the daily. Mike was our first introduction to the ranch and through our visit he was so engaging and helpful, always had a greeting for us each day and if he didn't know the answer to our questions he made sure he would find out for us.