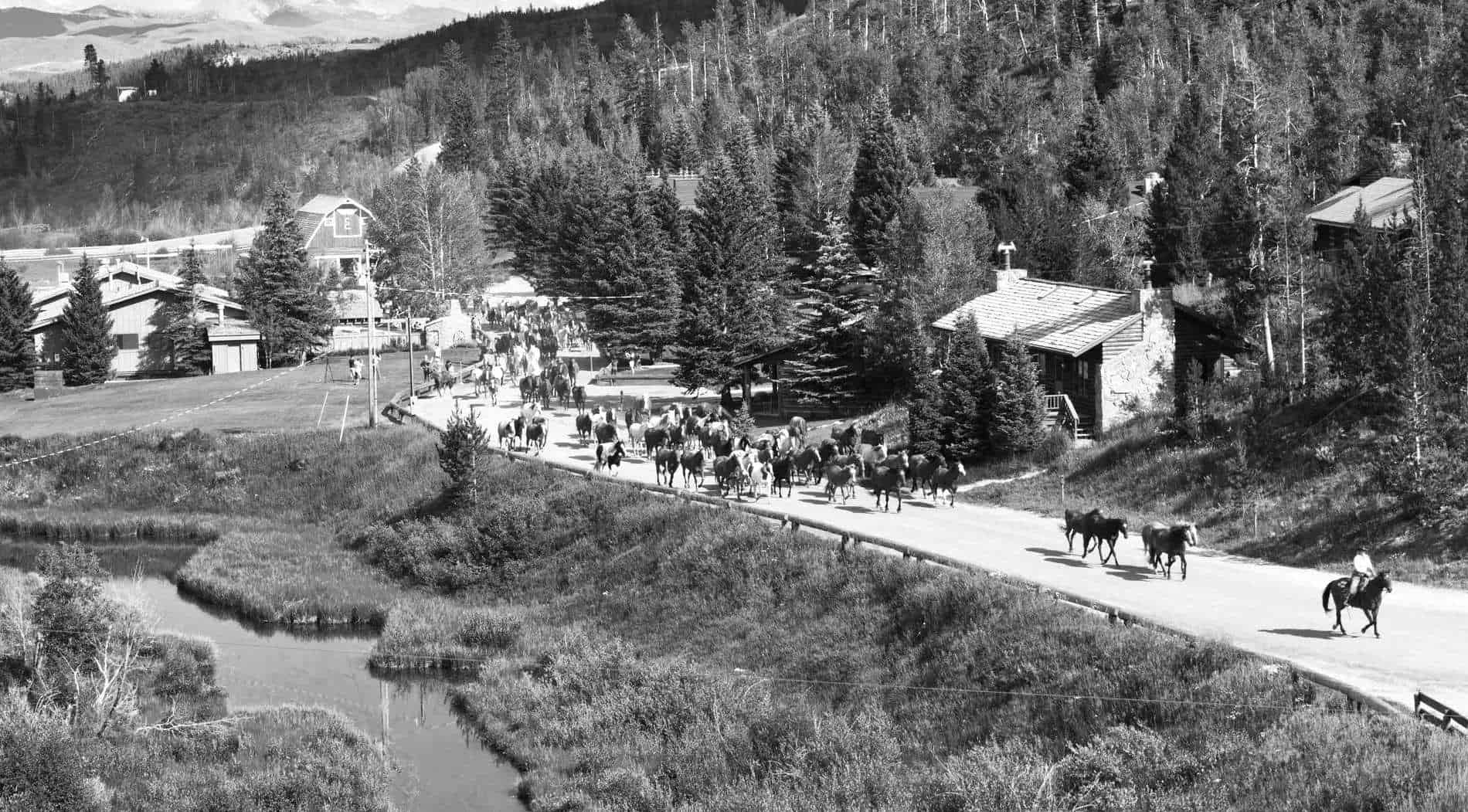 The History of Our Colorado Guest Ranch

The story begins with two families and two ranches. Both the Smillies and McQuearys were territorial pioneers of Colorado. Aubrey Fenton “Jack” Smillie was born in Eaton, CO and Gertrude McQueary was born on a ranch at Dexter adjacent to the one on Willow Creek that became the F Slash and ultimately the C Lazy U. In fact, the two ranches were connected by what the families came to refer to as “the Midnight Trail.” Gertrude’s father Milton Green McQueary ran the inn at Dexter and the post office known as Dexter (this building is now our “Dexter House,” used for staff housing.

The ranch on Willow Creek was purchased by Jack’s brother Wilson Smillie – a doctor and professor at Harvard – in 1917 under the encouragement of their mother, Christina, who wanted a ranch for Jack to manage or own (Jack had always wanted to be a cowboy, even though his parents had put great effort into educating him to be a professional of some kind like his siblings). Jack arrived at the ranch in the summer of 1917 and subsquently married Gertrude at Dexter in 1919.

Though he had been running the F Slash ranch since 1917, in 1920 Jack bought the ranch from his brother Wilson. Around 1925 two women from Massachusetts came to the ranch after hearing about it from Wilson. They loved the place and encouraged Jack and Gertrude to start running it as a guest ranch. And so it was, in the following years that the F Slash Ranch developed into a working guest ranch, which remained successful through its sale in mid-1945 (around July of that year).

Smillie and his family of four children built the barn without side wings in 1922 along with several other structures which are still standing: the Meadow House, River House, the old Bunk House, Spring House, Aspen House and Bird’s Nest. The Ranch House served as home to the Smillies with a kitchen and dining room for their guests. Today, that house has four additional guest wings and a lower level office. The small log structure between the Ranch House and the Lodge was the bathhouse which contained his and her showers, a rare luxury at the quarter century. Another small log facility common during this era was the root cellar which housed a Delco dynamo that supplied electricity to the ranch. The root cellar still stands next to Mare’s Nest behind the Lodge. With this expansion, the ranch could accommodate approximately two-dozen guests and offered horseback riding, trout fishing and bear hunting, plus all the steaks and fresh baked pies you can eat, prepared by Gertrude Smillie. During the 1930s, guest rates were approximately $40 a week or $125 a month.

A year later in 1946, Dick and Katie Schoenberger of New York City, and their partner Ivor Peterson purchased the ranch. The Schoenbergers met while both were executives working with the renowned New York design firm Norman Bel Geddes and Peterson was an electric motor manufacturer. The Schoenbergers later bought out Mr. Peterson. Dick and Katie renamed the F Slash Ranch the C Lazy U Ranch after the shape of Willow Creek which runs through the ranch. Before the creek was dammed in the late 40s, its meandering course seemed to spell out a C with a U on its side underneath it when viewed from above. Hence, the name C Lazy U.

The Schoenbergers brought with them just the right dose of New York sophistication to complement the rustic charm of the ranch. Throw in a dash of Katie’s southern manners and a sprinkle of Dick’s humor, and the newly-christened C Lazy U began a new era of success. 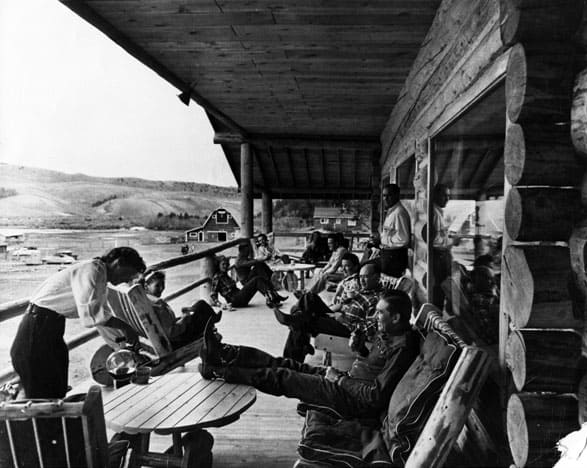 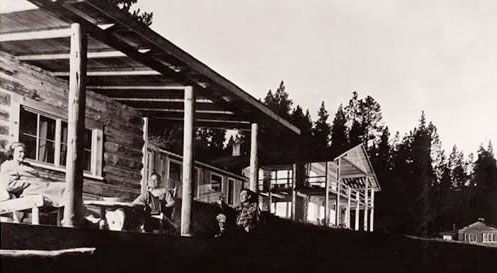 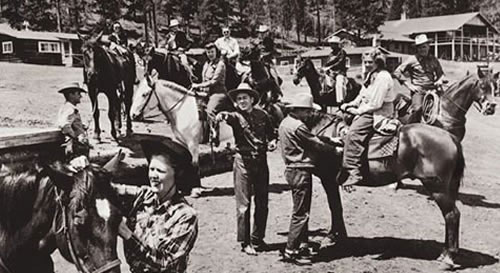 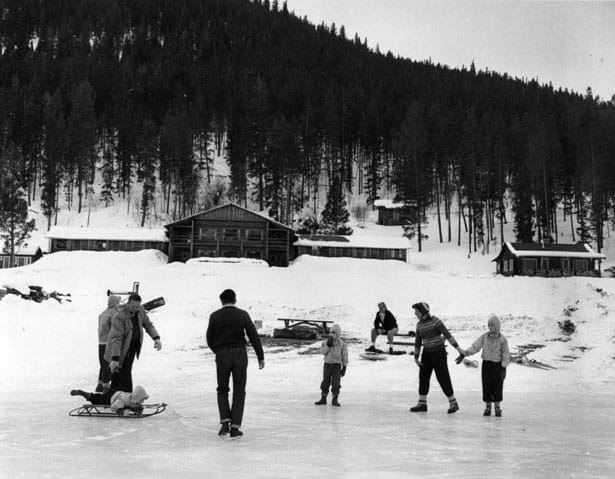 Construction of the Lodge began in 1947. The lodge pole pine logs were all felled from the Baldy hillside directly adjacent to the ranch and dragged to the site by chains attached to Jeeps. All of the stripping, notching and joining were done on site by carpenters skilled in building log structures. The quality of their work never ceases to amaze guests and owners alike. The lodge became the immediate focus of the ranch for dining and entertaining. Guest rates in 1947 were $130 per week.

One year later, in 1948 the east and west wings were built, adding and connecting six guest rooms to the lodge. With this final expansion came a change to the image of the ranch: the Schoenbergers could now entertain guests during the winter with a fire to warm everyone. They could share food and drink while watching the falling snow through the picture window. But the ranch still needed one extra ingredient: a program for children.

Marion “Mare” Palmer came to the C Lazy U as a guest in 1949, from Oak Park, IL. Already an accomplished horsewoman, she immediately fell in love with the beauty of the Rockies and became friends with the Schoenbergers. What the ranch needed, she thought, was a way for families to be together on vacation but also have time for themselves, so she started the children’s program. The program provided riding instruction along with entertainment and learning.

The ranch became a place where children could ride, eat and play together, yet still be with their parents a considerable amount of the time. Mare continued her own riding, showing horses and winning numerous prizes and awards in prestigious events such as the Denver Stock Show, the American Royal in Kansas City and in Madison Square Garden in New York. The young lady who came to the ranch as a guest never looked back.

Another long-time familiar face was Dawn Cone, forever head horse wrangler at the C Lazy U. Dawn started working at the ranch in 1955, sharing his expert horsemanship, dry humor and tenor voice. His was a voice you heard both on the trail and by the campfire. Sadly, Dawn passed away in February of 2013, while partaking in one of his favorite activities – cross country skiing in the Rocky Mountains near the Ranch.

The Patio House and swimming pool were built in 1957, just before construction of the skeet range. The ranch was changing quite rapidly during this time, flourishing as a full-scale resort with the addition of new facilities and new programs for its guests. Sadly, Dick became suddenly ill and died in 1963. Katie continued to operate the guest ranch successfully for 11 years until she sold it in 1973.

The new owners were George and Virginia Mullins of Denver, who discovered the ranch on their honeymoon. They too, fell in love with the C Lazy U and operated the ranch as successfully as they did their other companies in Denver. The Mullins continued the high standards set by the Schoenbergers, adding their charm and hospitality along with the construction of new guest units, the racquetball court, whirlpool, sauna and game room. The Mullins extended the summer season into October and further developed the winter program by adding groomed cross-country ski trails. There was now more of the year in which to enjoy the C Lazy U. The Mullins ran the ranch for 15 years, before selling it to the Murray family of Kansas City.

Clark and Peg Murray were vacationing with friends in Colorado when they first heard of the C Lazy U back in 1958. They telephoned Katie, but the ranch was booked that week in July, so they stayed at another ranch nearby. Another phone call to Katie landed them an invitation to dinner since she couldn’t accommodate them for lodging. But that one dinner was good enough for Clark and Peg. The next summer they came back with their twin sons, six-years-old at the time and the minimum age for horseback riding. Four years later, they all returned and also brought along their youngest son, by then five years of age, and continued to return nearly every summer for the next 30 years. But it wasn’t until the summer of 1988, that the fates of the C Lazy U and the Murray family were to intertwine.

The Murrays operate a group of family-owned businesses in the Kansas City area, owning several newspaper properties, as well as being the nation’s largest dealer in used newspaper production equipment. Over the next 30 years, the ranch became a second home for the Murray family, a haven in which to relax and be with friends who shared their love of the ranch. The dream of owning the C Lazy U was never seriously considered until a chance visit by Clark and his youngest son, Brian, brought them to Grand County on newspaper business in August of 1988. That visit spurred a series of negotiations which resulted in transfer of ownership of the C Lazy U from the Mullins to the Murrays later that year. The Murray family continued in the footsteps of their predecessors – the tradition of providing guests with “the vacation of a lifetime.”

An extended family partnership was announced by Brian Murray on May 1, 2008. Just as it has been over its long and storied history, the ranch remained family-owned. Four families united through their mutual love and appreciation of C Lazy U to preserve its legacy. The new family partnership brought together the expertise and resources necessary to improve the ranch vacation experience and infrastructure, while maintaining the core values of a family guest ranch.

The Murray family was delighted to welcome the families of Don Bailey and Leslie Stanford, Linda and Bill Jacobs, and Adrienne and Dean Singleton (each familiar to many of the ranch’s guests) as partners in ownership of the C Lazy U Ranch. Not long after the expanded family partnership the Jacobs and Murrays decided to sell their share of the ranch to Singleton and Bailey/Stanford families in 2011. The two remaining families united with a common goal to continue to operate as the Premier Guest Ranch in North America for generations to come, uphold the C Lazy U Ranch legacy, maintain and preserve the land while providing a superior experience for guests and members.

Don and Leslie of Denver along with their three children, Brooke, Tristan and Dorian, fell in love with the C Lazy U during a Buck Brannaman horsemanship clinic in 1999. The Baileys have since built a home at the C Lazy U Homesteads and spend several weeks a year at the ranch. While daughters Tristan and Dorian actively enjoy the children’s program, daughter Brooke has demonstrated her love of the ranch by working on staff as a children’s counselor.

Adrienne and Dean Singleton, also of Denver, along with their children William, Adam and Paige, have spent many winter holidays at the ranch. The Singletons were so enchanted with C Lazy U’s legacy that they contributed to its preservation by acquiring significant portions of land that are critical to maintaining the picturesque views. Dean’s participation ensured the ranch could preserve a combined total of 8,500 acres for the enjoyment of all.

We think you will find the spirit of the C Lazy U Ranch unchanged, yet with a new energy that will spark a wonderful revival. The atmosphere around the ranch is truly exciting, especially as people hear about our commitment to preserving and revitalizing one of the last great American western experiences.

More Information About the Ranch

Since it was my first time booking with the ranch I had many questions leading up to our visit. Some of which were probably repeat questions but anytime I called the front desk, the staff was always so patient and informative. Mike was our first introduction to the ranch and he really set the tone for the warm and inclusive welcome we received our whole trip.