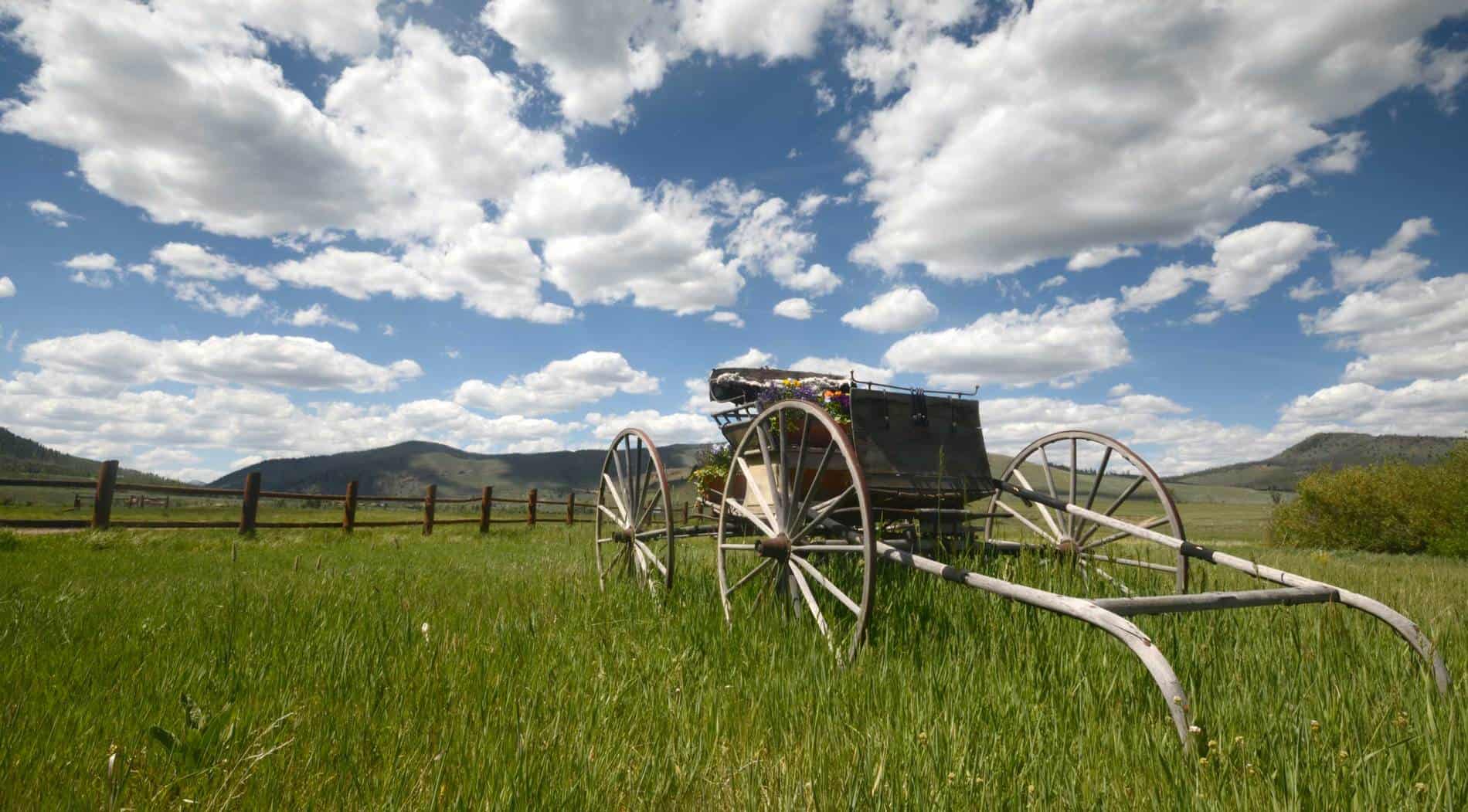 Some of Colorado’s most awe-inspiring natural attractions can be found right here at the C Lazy U Ranch. The ranch is lush with abundant plants and animals: 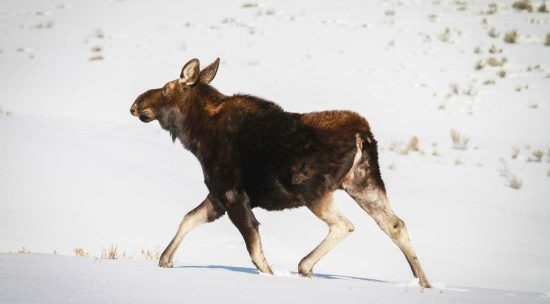 As the largest members of the deer family, moose are easily spotted. During the summer months you might see them on the Blue Dot Trail, Aspen Trail, Moose Paddle, Reservoir Trail or even grazing on the grass in front of the Lodge. Male moose have spectacular palmate antlers that shed each year, and some can even span six feet from point to point! If you happen to encounter a moose, never approach it. Instead, back away quickly and if a moose happens to charge, duck behind a tree or structure for cover. 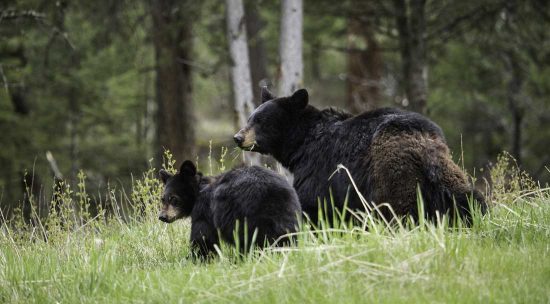 The American black bear is the smallest of the three bears species found in North America. Black bears have short, non-retractable claws that give them an excellent tree-climbing ability. You might happen across a black bear on Yellow Brick Trail, the Logging Road, or Baldy. If you happen to encounter a bear, make yourself as large as possible by holding your hands above your head, make lots of noise, and back away slowly. 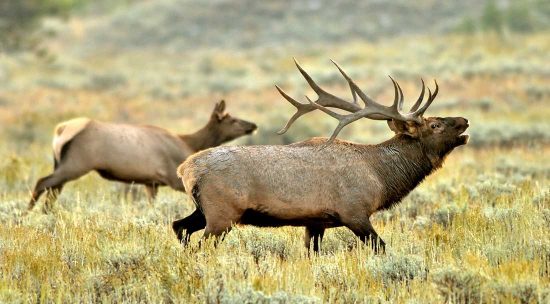 Elk are also called Wapiti, a Native American word that means “light-colored deer.” In early summer, elk migrate to high mountain grazing grounds where the cows (females) will give birth. On the ranch, you might see elk near Garden of the Gods or Wilson Pasture. 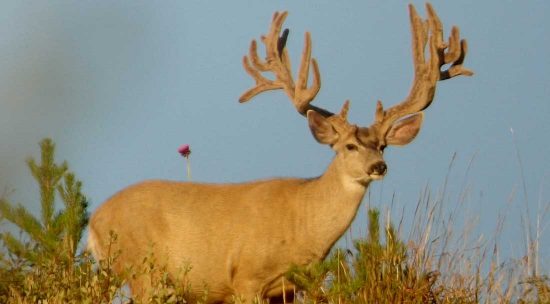 Named for their large mule-like ears, mule deer have called western Colorado home for decades. Herds in a portion of northwestern Colorado were so prolific that the area was dubbed “the mule-deer factory.” Deer migrate between the summer habitats in Arapahoe National Forest just west of the Continental Divide. In the fall, during the rut (mating season) they head west passing through the ranch and heading toward Kremmling. Adults typically weigh between 130-280 pounds. You can see them at the Duck Pond, Garden of the Gods, and on Mount Baldy. 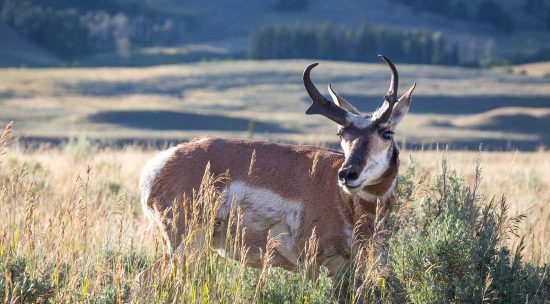 Related to goats and antelopes, both males and females have horns on the tops of their heads and have reddish-brown fur. While the female’s horns are just bumps, male horns can be ten to fifteen inches long and have a unique shape. They point backwards with a small notch or prong at the top that points forward—hence, the name! They are often found on the mesa or on Curtis Ridge. 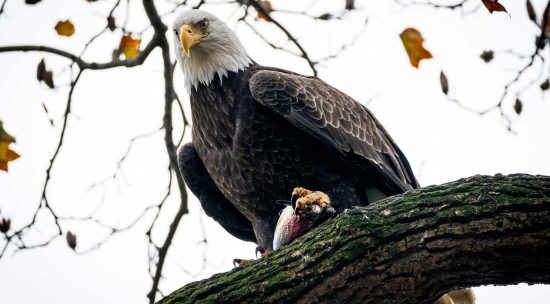 An adult bald eagle is mainly brown with a white head and tail. The males and females are identical in plumage, but females are about 25 percent larger than males. The bald eagle is the national bird of the United States. Look for bald eagles flying over Garden of the Gods or in their nests on the Reservoir Trail. 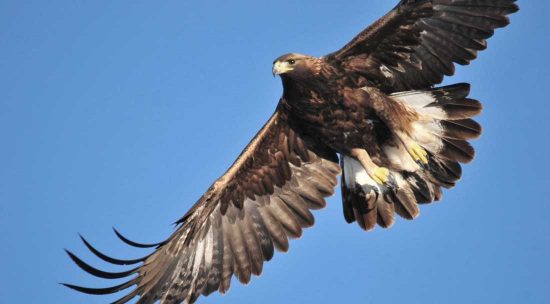 This powerful eagle is North America’s largest bird of prey and the national bird of Mexico. They are dark brown, with lighter golden-brown plumage on their heads and necks, and can dive upon their quarry at speeds of more than 150 miles per hour. They are often seen flying over the mesa near Garden of the Gods. 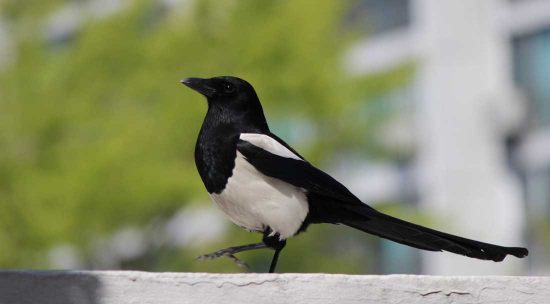 The Eurasian Magpie is a striking black and white bird with a long tail. The head, neck and breast are glossy black with a metallic green and violet sheen; the belly and scapulars (shoulder feathers) are pure white; the wings are black glossed with green or purple. The magpie is believed to be among the more intelligent of all animals and is a scavenger by nature. 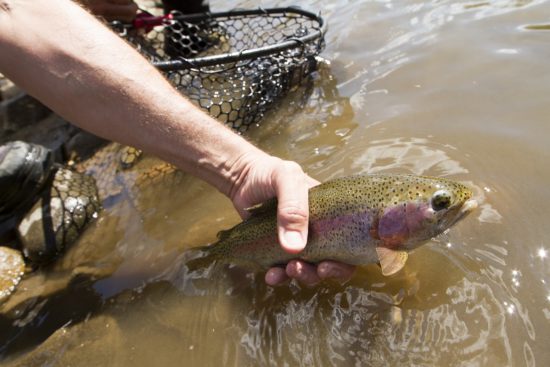 Coloring on rainbow trout can vary, but they are generally blue-green or yellow-green in color with a pink streak along their sides, white underbelly, and small black spots on their back and fins. As a member of the salmon family, rainbow trout can grow quite large, averaging about 20-30 inches and may weight up to eight pounds. You can catch a rainbow trout in Willow Creek or the C Lazy U pond! 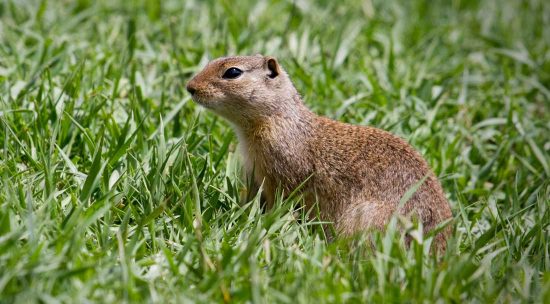 The ground squirrel is known for its tendency to rise up on its hind legs. They typically do this when danger is nearby. The squirrel then curls its paws flat against its chest and sends a screeching call to warn other family members about the presence of predators. Ground squirrels are easily seen along trails all over the ranch. 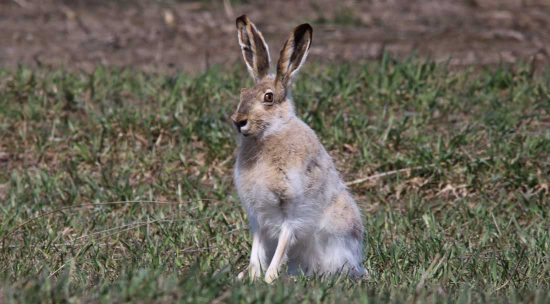 Slightly larger than a rabbit, Jackrabbits are considered hares as they have longer ears and taller hind legs. Named for their ears, Mark Twain initially called them “jackass” rabbits. They are speedy animals, capable of reaching 40 miles per hour and can jump as far as ten feet. These all white Jackrabbits are more often seen on ranch in the winter months. 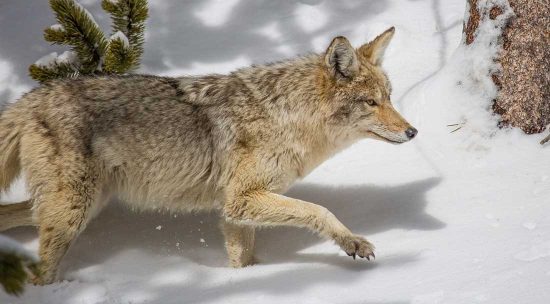 As members of the dog family, coyotes will eat almost anything: rabbits, frogs, fish, rodents, insects, and deer, just to name a few. They sometimes attack livestock, which is why Petey is so important to the herd. He helps protect the horses from coyotes. If you listen carefully at dusk you can often hear a pack of coyotes howling in the distance. 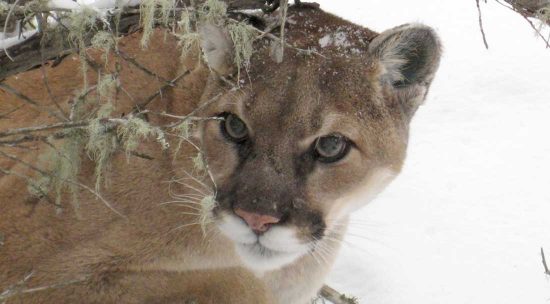 Mountain lions like to prey on deer, though they also eat smaller animals such as coyotes, porcupines, and raccoons. They usually hunt at night or during dawn and dusk. These cats employ a blend of stealth and power, stalking their prey until an opportunity arrives to pounce, then going for the back of the neck with a fatal bite. We don’t see too many mountain lions on the ranch, but those that were seen were spotted along Yellow Brick Trail.

Located all over the ranch and on its 8,500 acres, wild flowers enhance the natural beauty of the Continental Divide. You don’t have to stray too far from the lodge to find some of Colorado’s most spectacular flora. 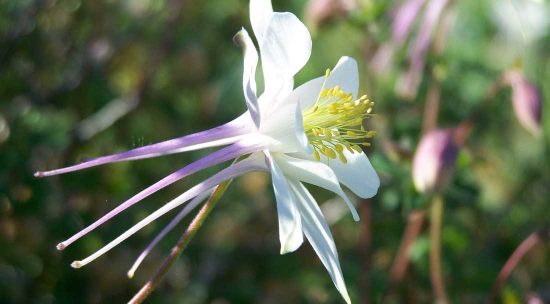 The state flower of Colorado, the columbine is bell-shaped and comes in a variety of colors (the most common being white and blue). They bloom in mid-spring and early summer, but take care not to pick them! It is against the law to pick wild columbines in Colorado. You can find columbines on almost any trail at the ranch. 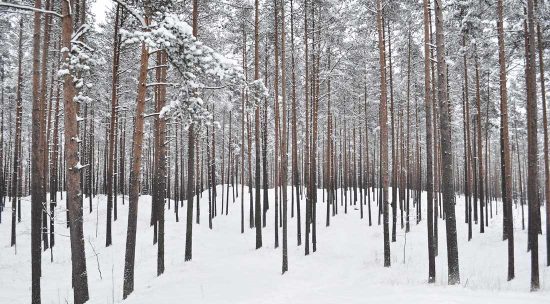 Tall and slender, lodgepole pines are easily seen around the ranch. They are conifers with a variety of cone shapes. Highly adaptable, these trees are often the first to regrow after a wildfire, as the pinecones are protected by a seal of pitch that requires fire or heat to release the seeds. Older lodgepole pine trees are susceptible to the mountain pine beetle, which burrows under the bark to lay eggs, killing the tree. Lodgepole pines affected by beetle kill are reused for furniture, shelving, and remodel projects around the ranch. 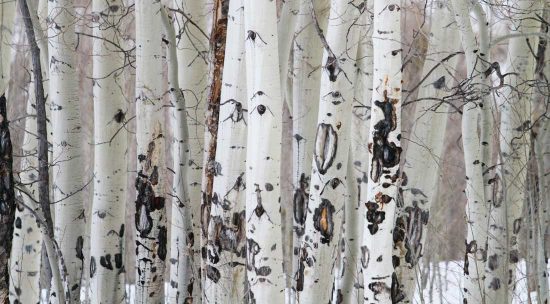 One of the most quintessential trees of Colorado is the aspen. They’ve even inspired the name of a popular ski town. Aspen trees grow via the “vegetative method” which means that the tree grows roots near the surface of the ground from which new trees sprout. This process can grow vast forests of aspen trees that are all interconnected by roots and are one giant organism. In Colorado aspen trees turn brilliant yellow, orange, and red during September and October. You can see aspens all over the ranch, but the Logging Road, Yellow Brick Road and Aspen Trail are especially beautiful trails to hike or ride during the fall. 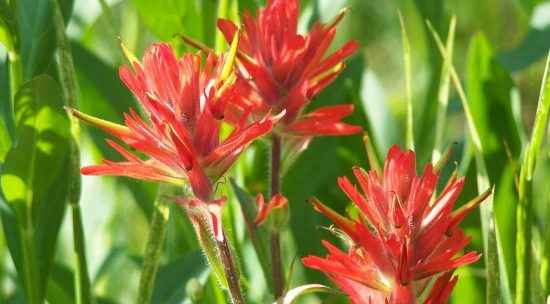 Growing as high at three feet tall these beautiful wildflowers are prevalent on the ranch, especially in the meadow. Their colors range from orange, red, yellow, or white. According to Native American legend, paintbrush flowers sprouted because of a young Indian brave who tried to paint the sunset with his war paints. Frustrated that he could not match the brilliance of nature, he asked for guidance from the Great Spirit. The Great Spirit gave him paintbrushes laden with the colors he so desired. With these, he painted his masterpiece and left the spent brushes in fields across the landscape. These brushes sprouted the flowers we now call paintbrush flowers. 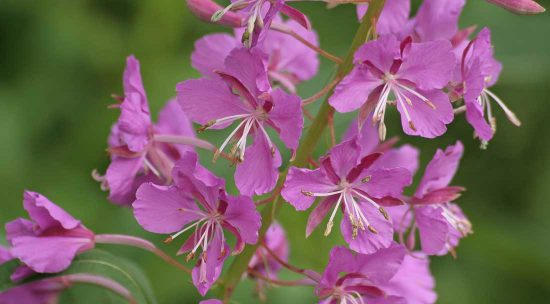 A colorful sight with its bright purple and pink blooms, fireweed thrives in open meadows, along streams, roadsides, and forest edges. The name fireweed stems from its ability to rapidly colonize areas burned by fire. A hardy perennial, the stems can grow four to nine feet tall. Check out the ranch’s fireweed flowers in the meadow or mesa. 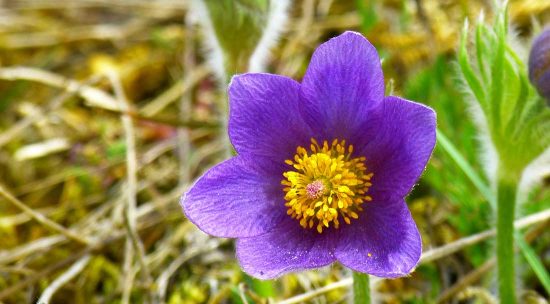 Sage flourishes well under sandy, alkaline soil. It features woody, branching stems, and its pebble-like patterned, aromatic leaves feature a grey-green, soft surface with fine hair-like filaments growing on either side. During summer, it bears violet-blue flowers in bunches that attract bees. Sage is one of the most popular herbs known since its first use in ancient Rome. It is used in cooking along with various traditional European and Chinese medicines for its health promoting and disease preventing properties. 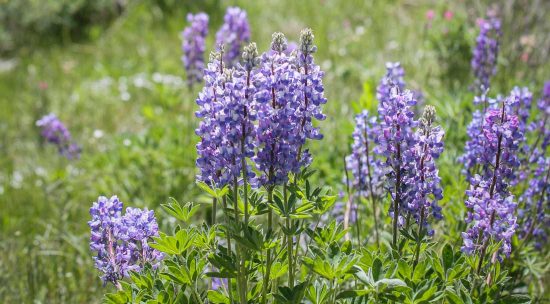 Sage flourishes well under sandy, alkaline soil. It features woody, branching stems, and its pebble-like patterned, aromatic leaves feature a grey-green, soft surface with fine hair-like filaments growing on either side. During summer, it bears violet-blue flowers in bunches that attract bees. Sage is one of the most popular herbs known since its first use in ancient Rome. It is used in cooking along with various traditional European and Chinese medicines for its health promoting and disease preventing properties.

More Information About the Ranch

The sommelier was excellent! She really knew her craft, and showed it every evening! She really went out of her way for our family!