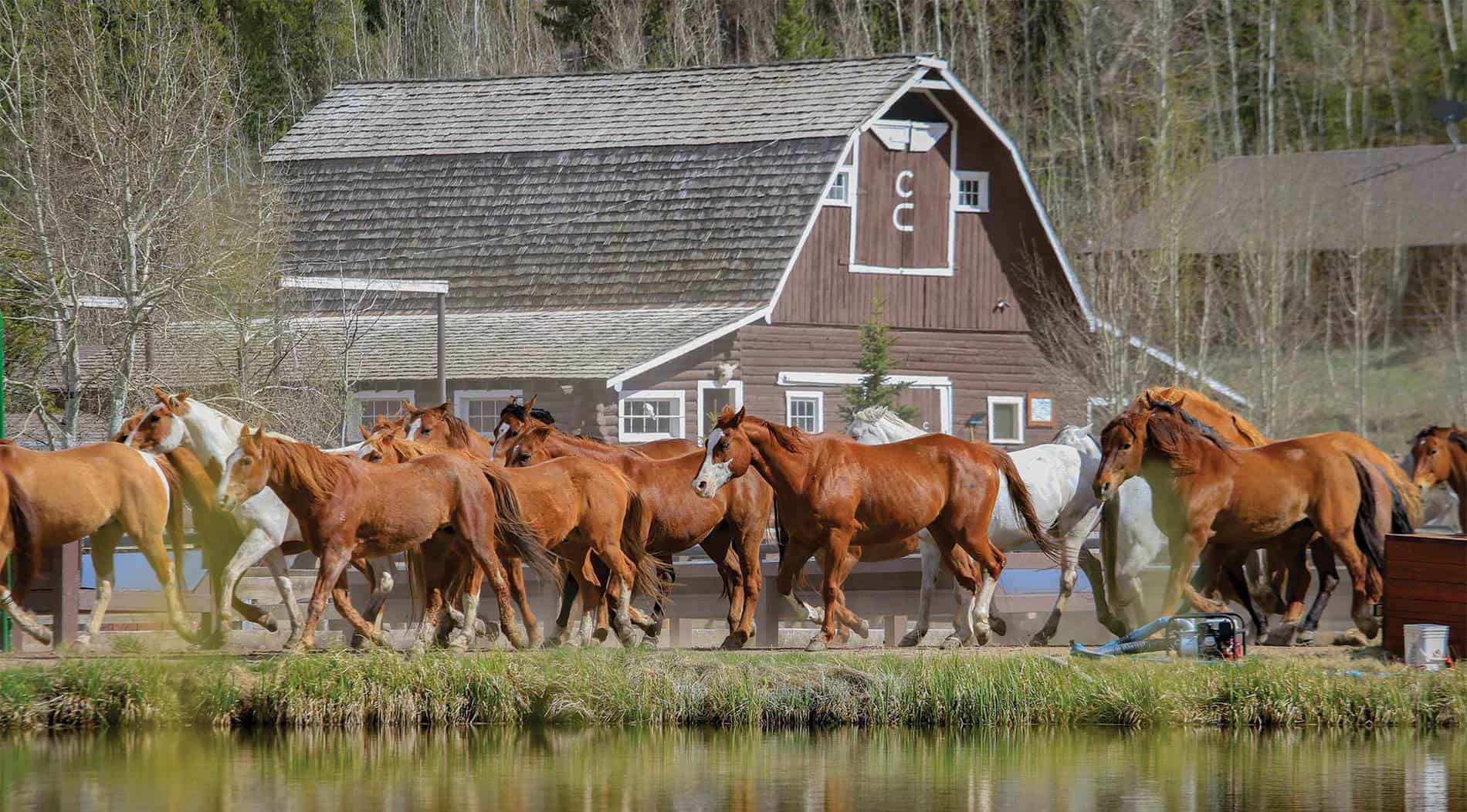 An initiative to restore the C Lazy U Ranch Barn

On October 21st and 22nd of 2020, the East Troublesome Fire made its way through the C Lazy U Ranch. Eight member homes, Evergreen guest cabin, two staff housing units and the iconic 98-year-old barn were all destroyed in the fire. Additionally, the ranch lost all of its hay for horse feed, including the new hay structure that housed it. All the horse corrals were damaged or burned, as well as several loafing sheds. A significant number of the ranch’s pastures and fence lines were impacted as well.

This page is dedicated to the rebuilding of the barn. We will post photos here and keep you updated on the construction status as soon as it begins.

The C Lazy U barn was built between 1920 and 1922 by Jack and Gertrude Smillie so they could begin operating the F Slash Ranch (now the C Lazy U Ranch) as a working guest ranch in the 1920’s. The barn was originally built as a dairy barn.

In 1947, Dick and Katie Schoenberger renamed the ranch, “C Lazy U Ranch” after the shape of Willow Creek, and the barn was re-branded. In this photo you can see the barn with one of the two tack rooms that Jack Smillie added later in his ownership of the ranch.

By the 1950’s the ranch had become a favorite equestrian destination that revolved around the barn, thanks in part to the children’s program established by Mare Palmer.

The barn has been featured in many magazine articles about the C Lazy U, and was a favorite photo op for weddings and other special events.

Due to its exceedingly rapid growth, the C Lazy Ranch guests, staff, horses and livestock were evacuated along with valuables, saddles, and historical documents. This extraordinary task was completed with the assistance of many local residents and caring individuals who came from as far away as Colorado Springs and Aspen. Horses were evacuated twice: once from C Lazy U Ranch and then again from a private ranch in Granby. Though the C Lazy U Ranch compound was spared early on, the erratic weather and fast-moving pace of the spread left no confidence that it was over.

In a joint effort between the ranch and firefighters, many precautions were taken to protect the ranch, such as starting controlled burns, removing flammable debris and digging firelines. The ranch compound remaining mostly intact is attributed to these amazing efforts.

On October 21st, the wind shifted and accelerated towards the ranch over Dexter Ridge. At 5:00pm that evening the emergency evacuation was ordered by the Fire Incident Command Center.

On October 22nd, the fire rapidly spread through the entire ranch property including the main compound, member communities and over extensive land and trails. Firefighters were called in after Sheriff Brett Schroetlin checked in on the ranch on his way home and discovered the barn on fire. Though it was too late for the barn, the fire at the Patio House was put out just in time. Their timely, valiant efforts saved a majority of the ranch property.

On October 22nd, the fire rapidly spread through the ranch property including the main compound, homesteads and extensive trails. Firefighters, led by Brandon Donner, were called in after Sheriff Brett Schroetlin checked in on the ranch on his way home and discovered the ranch on fire. Though it was too late for the barn, the fire at the Patio House was put out just in time. Their timely, valiant efforts saved a majority of the ranch property.

C Lazy U Ranch ownership and management have deemed the rebuilding process “Vision 2121.” There are many reasons to be optimistic and excited for the future, and though we are reopening in 2021, we look to restore and reimagine the next 100 years of C Lazy U Ranch; hence Vision 2121.

The ranch has created a committee that consists of the ownership group, management and members to manage the task of rebuilding of the barn.

The committee is in the process of enhancing and updating the barn while keeping its original charm. Updates may include things like: state of the art horse stalls, additional space for saddles and tack, more functionality, insulated and heated utilities, bathrooms for guests and staff, adding a second level common area for guests to enjoy which may include amenities such as a meeting room/living room complimented with food and beverage functionalities and viewing deck on the east side to take advantage of the spectacular vista of the Continental Divide and Indian Peaks.

C Lazy U Ranch has secured a temporary barn for saddle and tack storage, to use while the new barn is being constructed. The temporary structure will ensure a smooth operatio of C Lazy U’s world-renowned equestrian offerings during your stay.

As we begin the rebuilding process, we will post photos and updates as they happen!

Help Raise the Barn–Donate HereMany people have expressed an interest in helping to restore the barn. We are grateful for the outpouring of support. For those of you who have graciously reached out and want to donate we have established a PayPal account for this purpose. 100% of all proceeds raised will be used to rebuild the barn and each donor will be recognized for their thoughtful generosity.

Home » About the C Lazy U Ranch » Raise the Barn

After riding for two days a massage was definitely in order ... and Alejandro did a fantastic job. A special thank you to Kristin Craig who recognized my pain and discomfort and arranged for a copper tub soak on short notice.